We are excited to be teaming up with Dr. Jeff Stahl MD FACC, A Past Chairman of Cardiology St. Francis Hospital 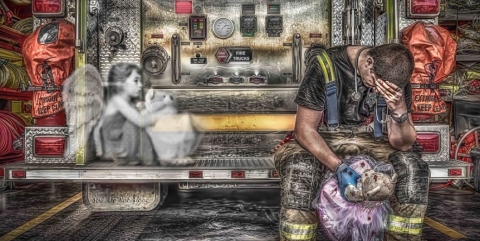 When we experience a traumatic event our brain goes through a chemical change and the military is studying these changes in the brain with PET scans.

Everybody goes fill out 10-75 (working fire). The address is 5826 Eastern Parkway and the fire is in a two-story commercial. Ladder 120 is the FAST truck (rapid intervention team).

When responding to a call as the FAST truck, we hope that we do not have to go to work for our intended purpose, to rescue a firefighter. Responding to the call you are thinking of all the possible things that can go wrong at this fire to "put you to work". Loss of water, member missing, lost or trapped member, low air, unconscious firefighter, collapse; the list is endless. These problems all to often start a cascade of problems, for example "The Domino Effect". In the fire service we can only control certain variables. Even when we control all of the variables firefighters die in the line of duty!

Battalion 44 to Brooklyn, Transmit the second alarm. We have heavy fire on the first floor extending to the second floor. We are starting our advance on the fire and we have reports of people trapped in the back of the store. Who is my Fast Truck?

Responding in you hear this report. You increase your thoughts on the task at hand. You feel yourself start to sweat and prepare for a fire that you know will test your training. You know your team is ready, but you don't know how bad things are really going to get! You remember your position and your responsibilities. What tools do I take? Where do I go? How will I get there? What companies are operating? Is there a basement? What type of construction? All these thoughts and many more should be going through the mind of every firefighter responding to the fire. Sometimes, this causes us to think about other things. Things we don't want to think about when going to a fire. As you pull up on the scene you hear on the radio:

Mayday, Mayday, Mayday Ladder 99 to Command Mayday! We are trapped in the basement in the rear of the store. The floor collapsed!

Command to the FAST Truck. Go in there and get them out! Ladder 99 is trapped in the basement!

As your team assembles their equipment, you rush to the command post to get the particulars. You are focused and determined to get these firefighters out. As you communicate with the incident commander, you hear a secondary collapse. The incident command radios Ladder 99 and they are not responding. Engine 98 is not responding as well. As you stand there for a split second, something comes over you. It is a feeling you have gotten before, at another tragic fire. You brush it off and move on. You start your search of the first floor, keeping your team together. You make it 15 feet into the store and encounter an every increasing fire condition. You are about to move forward to get the trapped firefighters when you hear on the radio "Mayday, Mayday, Mayday command to all units operating back out of the building! It is about to collapse!

You grapple with the thought of ignoring the order because you know there are fellow firefighters trapped below. You ponder for a second who could be down there? Do I know his family? Why can't we press on? I know I could save them! We have to get to these guys!

Command to the FAST truck! I am ordering you out of that building forthwith! You hesitate...then respond with a 10-4.

You roll call your members, and then back out of the building. As you reach the command post you overhear that Engine 98 is missing also. Just then the whole building collapses. That feeling you had before comes back. The feeling you got when you lost that two-year-old child, or that firefighter that died five years ago, or the deaths on Seprember 11 and Worcester MA, or New York City's Father's Day Fire and Black Sunday. Your world begins to darken and you feel as though part of you just died right there. You start to think of their families and kids. Who will watch them grow up? Who will take them to their first baseball game? Why couldn't it have been you! Why did this have to happen? If we only got there quicker...if we pulled them out sooner...if, what if?

These are thoughts and questions we ask ourselves when we go through a tragic event. As I write this article we are planning to bury nine very brave brothers in the Charleston Fire Department. We can only hope that the tragedy ends with those nine.

Post Traumatic Stress Disorder (PTSD) is a debilitating disorder that can affect anyone. It can develop when a "person experienced, witnessed, or was confronted with an event or events that involved actual or threatened death or serious injury, or a threat to the physical integrity of self or others". The response to this traumatic event must involve "intense fear, helplessness or horror" (DSM IV, 1994).

PTSD is the only diagnostic category, which is defined chiefly by its cause. It has killed many firefighters over the years and is a result of experiencing a traumatic event. When we experience a traumatic event our brain goes through a chemical change. The military is studying these changes in the brain with PET scans. Through this technology, they are able to study the affects of PTSD and who is at greater risk for it. This technology is not widely use in public medicine as of today.

Years ago PTSD was not really recognized. It was just someone having a tough time and the thought was they would get over it. What we are finding out more and more is that it is a chemical change in the brain, as a result of a trauma. It must be treated as quickly as possible, this will give the firefighter the best chance at a full recovery.

Our profession is a profession of stress. Along with the inherit risk of the job itself we are exposed to emergency situations that most people in this country only read about. This stress is a risk factor that firefighters cannot control. It is our job to handle these emergencies professionally and expeditiously to ensure the safety of the public we protect.

Tragedies such as Charleston cause a wave of emotions throughout the fire service nationwide. We need to be more proactive in the recognition and treatment of PTSD. Not only in Charleston but all throughout the country. Early treatment is the most successful path to controlling PTSD in the fire service. In order for us to fully understand who is at risk, there needs to be immediate on scene intervention, to assess early signs of trauma. Continued follow up in the firehouse of those affected by the tragedy should be mandatory, along with continued on going screenings on an annual basis to assess future problems that may arise.

We need to protect each other from this horrible disorder. It is our camaraderie that let us do what we have to do to save lives. Let's continue to use ths camaraderie to save each other's lives. A motto that is used in the military and fire service is, "Leave No Man Behind", and when it comes to PTSD we must not let another brother or sister deal with it on their own, because if we do the tragedies will continue to grow even though the fire is out.

When you subscribe to the blog, we will send you an e-mail when there are new updates on the site so you wouldn't miss them.

Using the Situtational Awareness Cycle to See the ...

Robert J. Brown Jr., Registered Physicians Assistant-Certified (RPA-C), is a Lieutenant with FDNY's Special Operations Command. He joined the FDNY in 1996, following a four-year tenure with the Glenwood Fire Company in Long Island. He served as a firefighter in FDNY Engine 58, a Lieutenant at Tower Ladder 120 and is currently detailed to Squad 41. Brown founded the New York Firefighters Heart and Lung in 2002, which is a medical center that was created exclusively for firefighters and their families. He is currently a practicing Physicians Assistant in cardiology and firefighter healthcare issues. He is the president of New York Firefighters Heart Foundation, the mission of which is to educate and support families of the fire service. Brown speaks nationally on firefighter health and safety.

More posts from author
Wednesday, 06 May 2020 First Due: Break the Chain of Catastrophe
Monday, 16 December 2013 Using the Situtational Awareness Cycle to See the Big Picture